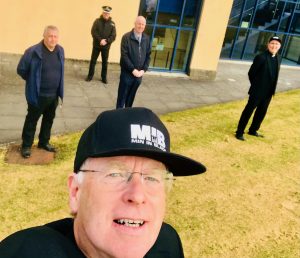 The Shoes Brothers (aka ‘Min in Black’ / Fr Willie & Rev Neil) were happy to be associated with Irvine Police’s move to encourage responsible and respectful behaviour in and around the Old Firm Scottish Cup game on Sunday. For the last 11 years we’ve been determined to bulldoze barriers, build bridges and celebrate community. Our annual Advent short films, Christmas singles, weekly Soul Sunday Irvine Beat FM shows (9.25am each Sunday) and regular ‘Shoes Brothers Dance’ Facebook posts combine to leave our town without any doubt that we are the best of pals, despite our differences as Roman Catholic priest and Protestant minister. 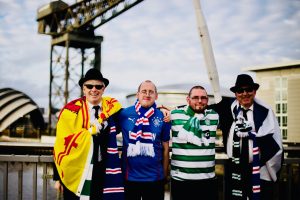 Sectarianism, according to one definition, is bigotry, discrimination or hatred arising from attaching importance to perceived differences between subdivisions within a group, such as between different denominations of a religion, class, regional or factions of a political movement. Over the 32 years I’ve lived and worked in Irvine I think religious bigotry has reduced but it is still breathed in in some homes and spat out in graffiti, antagonistic comments, drunken brawls and supposed banter. Alas, the ’90 minute’ bigot is alive and well, coming out in and around Celtic v Rangers games. But the sooner we can all learn to appreciate our shared common humanity, no one being better than the other, and learn to respect (not just tolerate) each other, the better. “We’re all Jock Thomson’s bairns.” “A man’s a man for aw that.” “We’re all God’s children.” There are many ways of saying it, but we all can say a big ‘No!’ to sectarianism and all other ‘isms’ which undermine respect, care and concern for our neighbours and fellow humans. One of our Shoes Bros stunts is to tie Rangers & Celtic scarves together with a Scotland scarf. Recognising that we belong to something bigger (Scotland / Humanity) can give us a bigger and better context and perspective. 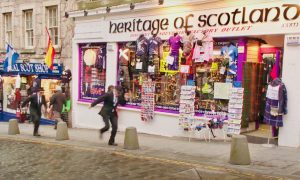 The goodwill in our town & land is immense as shown by people’s willingness to join in with our Shoes Bros song and dance routines! The ability to laugh at yourself does help. My ‘colleague in crime’ Father Willie Boyd is such a braw bloke, game for a laugh, and thoroughly committed to proving that protestant & catholic can do so much more together than apart! As Willie & I once bounced our way up the Royal Mile, I declared, “I love making these films Willie!” to which Willie replied, with feeling, “Yes you really do Neil, don’t you? This is SO NOT ME!” What a guy! I take my trilby off to you my dear friend and brother! 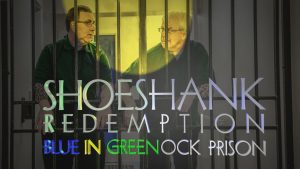 I recently watched ‘The Three Kings’ documentary of the Scottish greats Matt Busby, Bill Shankly and Jock Stein, who managed Manchester Utd, Liverpool and Celtic to great heights. What came through for me was the frailty and common humanity of these greats. Bill Shankly famously said, “Some say that football’s a matter of life and death, but I say, ‘it’s more important than that!’” Later in life he retracted that statement as hyperbole, overstatement, indeed untrue. Family for him had come through as much more important.

According to The Bible, loving, caring ‘relationships’ are what life is all about; learning to have harmonious relationships with: God, within oneself, with others (family, friend, neighbour, colleague, team members, opponents, even enemies) and with our planet. Lead on Lord Jesus!