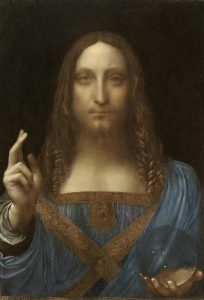 Wow, an average looking Da Vinci painting of Christ fetches $400 million! Some mark-up from the £45 paid for the ‘Salvator Mundi’ (World Saviour) in 1958. The painting, that decorated 3 kings’ walls, is cracked, worn and overpainted, but has obliterated all records for privately owned art.

World focus is on the artist, the painting’s authenticity and exorbitant fee, such wealth being invested in art, while people starve. Similar questions are being asked of the £40 billion Brexit bill for leaving The EU. My focus is upon ‘The Christ’. His right raised fingers of universal blessing, adopted by Killie FC in their club crest (much in need of 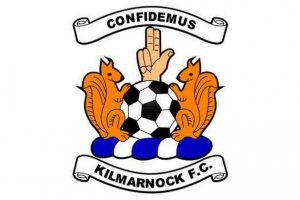 blessing right now), is a pose used by Revs the world over, sign of blessing radiating out from Christ through God’s People, into daily life & living.

Of the orb held in Christ’s left hand, art critic Kemp says, “It’s not the normal ‘Mundi’ sphere. This is the sphere of the fixed stars, of the cosmos. So, Leonardo transmuted it from being a savior of the world to being a savior of the cosmos. That’s the kind of genius he was capable of.” About 100 years after this painting the world would be recognised as ‘round’ rather than ‘flat’. Was Da Vinci challenging the world order? Dan
Brown may have some conspiracy theories up his sleeve, but they’re distractions from the real truth, that Christ enters Our World as Saviour and Lord.

7.3 billion people live in the world today, of which 2.2 billion are identified as Christians. And with more people becoming Christians than ever, the population of Christianity is moving from West to South & East, where The Third World or ‘2/3 World’ (cf. China) is fast becoming the main ‘soul & mission sending culture’ (cf. Africa, South America, South Korea). 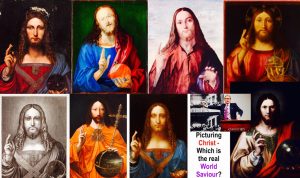 Much more staggering than the appreciation of Christ’s painting is the spread and growth of Christ’s followers. Curiously, before the spectacular sale, sceptics like Saltz (NY magazine), caned the portrait of Christ as “dead” and “inert”. Predicted to sell for only $100 million, Saltz decried the painting “a sham” and suggested Christie’s sale would end poorly, “No museum on Earth can afford an iffy picture like this at these prices.”

Remember Gamaliel’s wisdom, when Jewish authorities tried to shut Christ’s first followers up, “So I am telling you: Hands off these men! Let them alone. If this program 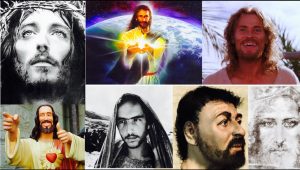 or this work is merely human, it will fall apart, but if it is of God, there is nothing you can do about it—and you better not be found fighting against God!” (Acts 5:38-39) 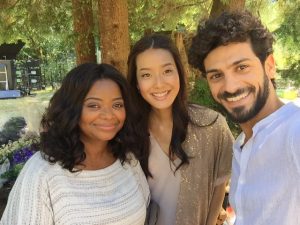 Yet, don’t so many artistic images of Christ, do a disservice to the life-transforming, world changing ‘Good News God’? The thought provoking book & film ‘The Shack’ bucks this trend to portray Papa (Father God) as a beautiful, smiling black mama; Jesus as a fresh faced, friendly Jewish gent; and The Holy Spirit as a lean, gleaming Asian young lady. 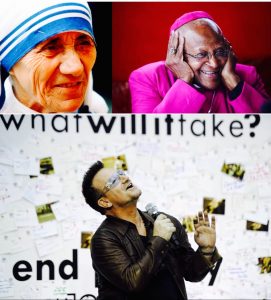 The smiling faces of Mother Teresa, Desmond Tutu & Bono are some of the best recent reflections of Christ around today. They remind us that God wants to shine His Love through your life and mine, ensuring that appreciation of the real ‘Saviour of The World’ can grow in our neighbourhoods.