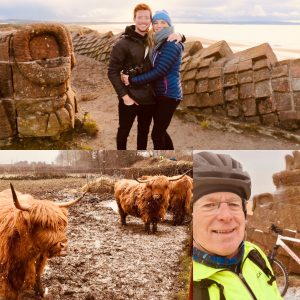 I was on a bit of a ‘Ginger Bender’ last weekend, with three Gingerrific moments:

Mountain biking through Dundonald Woods, I bumped into three hieland coos, met from a previous #60secondsermon. My sermons can be likened to these marvellous specimens’ horns, with two points and lots of ‘you know what’ in between. But I hope these beautiful auburn beasts, renowned for prime beef, may sometimes be like my sermons in offering a good chew and nourishment. 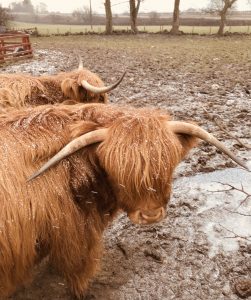 Apparently hieland males’ horns point more upright, while the female’s are flatter. Thus, one of these three may be female, nonetheless I affectionately called them Seamus, Jock & Tavish and had a right good natter with them. Hieland cattle are quite mild natured, though one of them did give me a ‘bum steer’.

I biked on to Irvine Beach Park’s iconic Red Dragon for some snowy photos of our jaggy ginger. It’s a little disconcerting that one of Irvine’s favourite visitor attractions is symbol for Satan and opposition to Christ in Revelation 12, but I affectionately treat our magic dragon more like pet ‘Puff’. I never tire of the view from this elevated spot and the wisps of snow gave Puff quite a different aura from usual.

Now, apparently 6% of the Scottish population are ginger in hair colour, the highest preponderance of red heads in the world! And my third 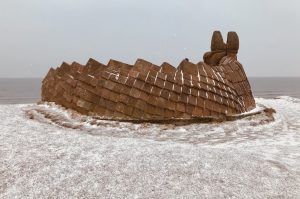 encounter was with Zak (Facetimed), who got down on bended knee and proposed to our Zoe on St Valentine’s Day (Zak’s birthday too). They aim to marry in August, whatever restrictions are in place.

Urban definition of a ‘Ginga Ninja’ is a red/auburn haired male who holds his own in hand to hand combat, and usually wins with a strike you weren’t expecting. It’s been a whirlwind romance, but Zak’s proposal came as no surprise as he’d already sought our blessing, which Dorothy and I were delighted to give; they make a great couple! 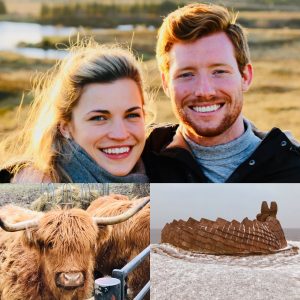 Where am I going with all of this? Not sure – Some red heads may be aggrieved at me throwing the ‘ginger’ word around so light-heartedly. Apologies if that’s so. But I want to celebrate how beautifully distinctive you red heads are and how wonderfully diverse we humans are, rejoicing in God’s creativity.

I’ve been going grey since a teenager and will soon be unable to say ‘better grey hair than nay hair’, with receding hairlines harder to hide. Other signs of ageing are my deepening brow furrows, spreading vitiligo (white skin pigmentation) and reduction in real teeth. What helps me to (a little grudgingly) embrace such change is the trump truth that I am beloved by God and the significant others in my life, who see inner beauty and character as more important than face value. 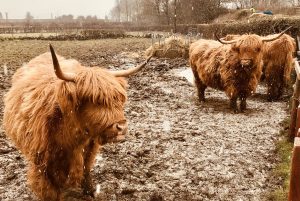 I’m not encouraging you to ‘go to seed’, but Who you are and are becoming is much more important than looks. Be sure God loves you the way you are and loves you too much to leave you the way you are. The famous old Irn-Bru chant could be sung over you and I, ginger or not (Remember West Coast Scotland calls all fizzy drinks ‘ginger’): “It’s fizzy, it’s ginger, it’s phenomenal!” Believe it My Friend, You Are PHENOMENAL!