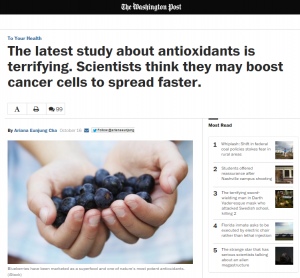 Nick was terrified! Ordering salmon in a restaurant he glimpsed a newspaper headline, “Farm salmon linked to cancer chemicals!” He changed his meal order.

Better informed, he stopped his wife from using her deodorant by waving another headline under her nose, “Deodorants linked to cancer!” On a mission to ‘save the world’, he swiped aspirins from a friend’s hand, brandishing the caption, “Aspirin ups risk of cancer – Survey”. His mate dismissed such scaremongering, “Even if aspirins are harmful, the effects are curable!” But Nick countered with another headline, “National Health Service putting patients lives at risk – Study”, and told him not to be so complacent.

Perhaps Nick should change his newspaper? Or might his newspaper report more ‘Good News’? The 21st century has been described as ‘the age of anxiety’. Despite living safer and more comfortable lives compared to our forbears we wallow in terror & thrive on fearful headlines, which portray scientific ‘links’ and ‘connections’ as gospel truths.

If terrorism is as much about ‘the intention to intimidate or coerce societies’ as it is ‘the unlawful use or threatened use of force’, could we declare war on some media headlines? 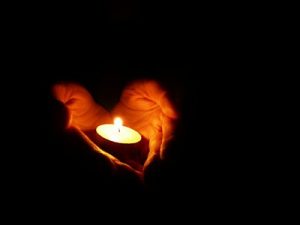 When St Paul wrote of learning, “to be content whatever his circumstances”, he was serious. He lived in dangerous times, through trials which would crush many today. Yet, whether “well fed or hungry… living in plenty or in want”, he rejoiced in his constant source of purpose, power & peace, in God.

This is not to bury heads in sand and throw up a white flag of surrender to local & worldwide challenges like world hunger, violence, disease, cancer, HIV, & Aids. Indeed, 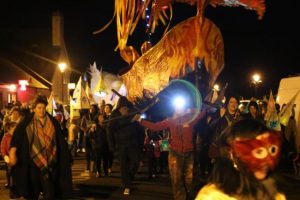 we rejoice in constant medical breakthroughs and commitments to share the world’s wealth more equitably. The Contentment St Paul models, is not blind fatalism, but active trust as we sleep, wake, walk, work & daily weigh up our options.

“Summing it all up, friends, I’d say you’ll do best by filling your minds and meditating on things true, noble, reputable, authentic, compelling, gracious—the best, not the worst; the beautiful, not the ugly; things to praise, not things to curse. Put into practice what you learned from me, what you heard and saw and realized. Do that, and God, who makes everything work together, will work you into his most excellent harmonies.” (Philippians 4:8-9 / MSG). 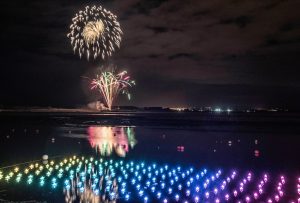 This week Irvine celebrates the Scottish Maritime Museum’s Light Festival. 1,000’s will crowd Harbourside to marvel at the dramatic impact of light’s colours overtaking darkness. We’ll also acclaim the journey from isolation to community, which the festival and our town commends in our motto, ‘The good cause always triumphs in the end!’ ‘Better to light a candle than complain about the darkness!’ Don’t let headlines rob you of 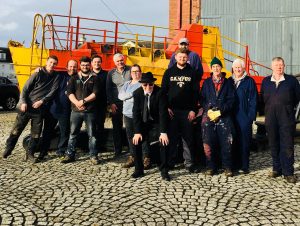