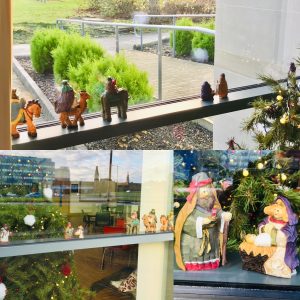 Kids come out with some crackers! One youngster asked where the ‘bear’ in a nativity scene was. He saw a donkey, sheep and even a cow, but no bear! His parents assured him there were no bears in the story of Jesus’ birth, he protested “Yes there are! Mary, Joseph and The Stable Bear!” 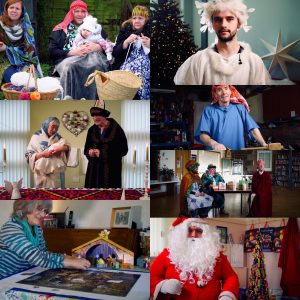 So normal nativity plays are outlawed in schools and church services, forcing us to be creative with ‘nativity’ in celebrating the ‘reason for the season’ CHRISTmas. ‘Alternativity’ has long been our approach to Christmas at Fullarton and we like a challenge, so Loudoun Montgomery Primary School are filming a musical nativity play, which Dorothy has put together and will be used in our 6.30pm pre-recorded Christmas Eve Service. Fortunate that we’re still in tier 3 and able to use ConneXions, we’ve also filmed a quirky nativity play, which includes Santa pointing us to God’s Generosity in giving us Jesus, to be shown in our 20th Dec’ 10.30am pre-recorded service. These nativity plays aren’t the same as face-to-face performance and audience, but many more people, beyond the normal circle, will have the chance to connect and enjoy the efforts of our young-stars and old-stars as they point us to Jesus. 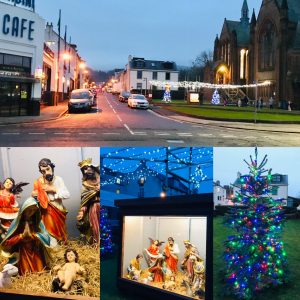 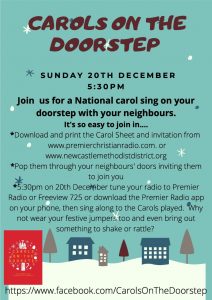 Singing indoors is also banned, but Premier Christian Radio have come up with ‘Carols on Your Doorstep’! On 20th December at 5.30pm, 3 or 4 of the most popular Christmas carols will be broadcast nationally,  encouraging us to join our neighbours to gie it laldy and belt out God’s Praise from the Covid safety of our own doorstep or front garden. Irvine Beat FM will broadcast the songs too, allowing even more people in our area to join in! See carolsonthedoorstep.co.uk for details. 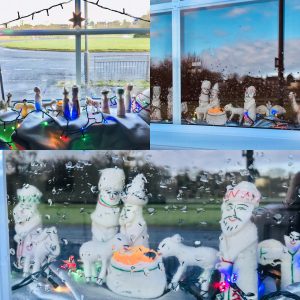 Another creative project is #nativityseen – Step 1 Dig out your nativity scene. Step 2 Place it at a window which can be seen from the street, with the characters facing outwards. (After all nobody can come into your house to see it this year!). Step 3 Add some fairy lights if you have them. Step 4 Put a picture on Social Media #nativityseen and encourage friends to join in (e.g. on FaceBook, twitter or Instagram). 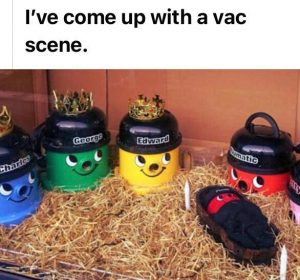 Visiting my 90 year old mum in Largs last Sunday I was delighted to see St Columba’s outdoor Nativity Scene, a great #nativityseen! Then there’s the humour of some ‘wise guy’ who’s found the ‘Vac-Scene’ with small roll-up vacuum cleaners dressed as the nativity scene characters. Hoping and praying we can “go viral” in a good way (!) and spread the news that Jesus Birth is truly worth celebrating this Christmas, His loving presence ever near to foster Peace, Hope and Love. Trusting that your stable isn’t bear or bare. Happy Advent Adventures my friends!