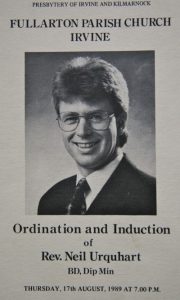 One of the main reasons I’ve remained Rev at Fullarton Parish Church for nearly 27 years is how game people are to try something a bit different. From the word ‘Go’ Fullarton folk had to adapt to someone almost one third of the age of my fine, inspirational and hard working predecessor Rev P.G Thomson, here for almost 37 years. Another reason is how gracious and forgiving the Fullarton

Family are when I try their patience. The length of time one stays in the same parish can have a lot to do with one’s ability to say ‘Sorry’ when you get it wrong.

The rumours around Irvine early on in my ministry about this ‘frustrated Cliff Richard’ leading praise from the pulpit with his guitar were amusing. A few longed for and prayed for the day I left Irvine, but on the whole people were delighted to see younger families and teenagers coming to worship. I started where Fullarton was, wearing my black Geneva gown and cassock, for summers divesting for a lighter look, with suit and small dog collar.

After a few summers I just never put the gown back on. I inherited the tradition of singing ‘Amen’ at the end of every hymn and continued with it for 5 months till the New Year, when we would only sing ‘Amen’ if it was in the music and wording.

Over time lots of little changes were introduced as we tried to get people more involved in worship, witness and working for The King. I remember wondering if I’d bitten off more than I could chew introducing ‘the breaking of bread’ as it was passed along rows for communion, but someone graciously made little napkin holders for the bread to make it easier and more cleanly.

And so to yesterday’s morning service: I confess to being a little apprehensive due to the nervousness of one or two others involved in the plotting and planning of a service with a difference. We’re working our way through ‘The Story’ the Bible condensed into 31 chapters like a historic novel.

We’d reached Israel’s 40 years of ‘Wandering’ in the wilderness and created 6 different stations for people to choose from, each giving a different learning style and spiritual pathway. While the kids were in one place, some adults were singing, meditating, creating, listening or wandering.

After a Fire Drill, for 25 minutes we tried something new, allowing us to choose which way to learn. I donned my Kafir covering and became Moses leading our group outside through the wilderness. No, I didn’t manage to part the River Irvine, only my hairline, but we stretched imaginations to see in place of concrete and tarmacadam mountains and desert. Roll and sausage was on offer from one café rather than manna or quail. We met and walked with people we’d never chatted to before and enjoyed the interaction with some passers by. Some of us managed to connect our lives with the frustration of going round in circles and asked God to help us find new direction and purpose.

We re-joined the Fullarton Family in the church sanctuary for fruitful feedback from all the groups, and brought everything together in God’s Praise. We’ll only try such varied learning from time to time, but we’ll definitely try it again. Fullarton, thank you for being you and willing to try new things!!!