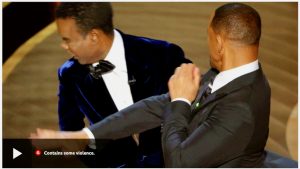 So, why did Will Smith stride onstage to slap comedian Chris Rock for cracking an ill-conceived, poor taste joke, aimed at Will’s wife Jadda? Was he trying to defend his wife, pride, masculinity, identity, or even his mother, having grown up in a troubled home, or was it simply staged to increase interest in the Oscars, Smith & Rock? For sure there was more going on than met the eye when Smith palmed Rock’s cheek. For sure a punch would have better satisfied our violence loving world. Past Killie managers I worked with would describe such a fracas on the football pitch as ‘toffee’ or ‘handbags at noon’.

On the other hand, @RevEricAtcheson tweeted, “Subjecting women to cruel jokes at their expense in front of God and everyone and physical assault are two sides of the same coin, and that coin is toxic masculinity, here ends the sermon beloveds.” People are paid to react and respond to such Hollywood slapstick, but before we pass judgement on either Smith, Rock or others involved, let’s be sure to look in the mirror and recognise in each of us the ability to ‘kill’.

Jesus said, “You’re familiar with the command to the ancients, ‘Do not murder.’ I’m telling you that anyone who is so much as angry with a brother or sister is guilty of murder. Carelessly call a brother ‘idiot!’ and you just might find yourself hauled into court. Thoughtlessly yell ‘stupid!’ at a sister and you are on the brink of hellfire. The simple moral fact is that words kill. “This is how I want you to conduct yourself in these matters. If you enter your place of worship and, about to make an offering, you suddenly remember a grudge a friend has against you, abandon your offering, leave immediately, go to this friend and make things right. Then and only then, come back and work things out with God.” (Matthew 5:21-24 / MSG) Hopefully Chris and Will can meet up like honest blokes to forgive each other and good can come from all of this. Smith has publicly described his behaviour as “unacceptable and inexcusable”. He claims to be ‘a work in progress’ (aren’t we all!?), described violence in all its forms as poisonous and destructive and admitted embarrassment at his actions. The actor apologised to Rock in writing: “I was out of line, and I was wrong.” But words are cheap and empty unless backed by a readiness to own our guilt and get right with one another. Rock did not want to expel Smith or press charges, which suggests that there is a willingness in each of them to find the best way forward.

Apparently, Denzel Washington came alongside Smith to calm and assure him after his outburst, Denzel aware that Will may receive his own first Oscar award for playing tennis stars Venus & Serena Williams’ father Richard Williams in ‘King Richard’. And in his Oscar acceptance speech, Smith quoted his friend Washington bout how, ‘at the highest points in our life the devil comes to us’. And those of us acquaint with spiritual warfare say, “Very True!” It’s no excuse for our bad behaviour, but an ‘unholy trinity’ is ever at work to undermine and destroy our identity as beloved peace-loving children of God. The World (claiming right is wrong & wrong is right, in this case violence), The Flesh (our own human weakness) & The Devil (Satan, a liar and tempter extraordinaire) come to derail us if we’re not careful.

At the high point of Peter’s profession of faith in Jesus as Messiah and Son of God, Peter also tempts Jesus with fame without crucifixion. Jesus tells Peter straight, “Get behind me Satan!” Learning to tell the devil to “Scram!” is a vital life lesson for Rock, Smith and us all.