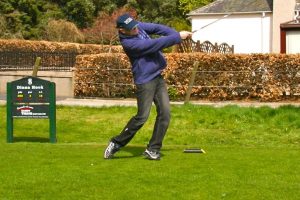 As a youngster, almost every waking summer hour was spent golfing, such that my only school prize was for golf. For my first 15 years in Irvine, along with fellow clergy, I enjoyed the special Monday morning Rev-rates at Glasgow Gailes until they bumped them up from £3 to £25. Still a bargain, but my weekly routine was derailed and replaced by Friday morning training sessions as chaplain with Killie FC.

Presently I only play 8 to 10 times a year, mainly on holiday with The TOFFs (Tain Over 55’s). Thus my gowf goes from guff to great to gratingly awful, but I still enjoy getting out to swing the clubs and hit (and often lose) the little dimpled white pill. Like ‘Donald The Dub’, in Frank Crumit’s folk song it can become a strange exercise in self-suffering:

“…Now Donald the Dub joined the country club, and found a fellow duffer;

Just as bad as he, so with shouts of glee, they both set out to suffer.

They played nine holes, and the poor little moles were never scared so badly

For the divots flew, and curse words too, and the birds and the bees left gladly…”
But what a pleasure to see the ‘beautiful game’ coming to Irvine with The 2017 Men’s  Scottish Open being held at Dundonald Links, 13-16 July. With a Prize Fund of $7,000,000 some of the worlds’ best golfers will be playing in my parish, Rory McIlroy, Henrik Stenson, Adam Scott, Rickie Fowler, Matt Kuchar and Patrick Reed among them.

And then 27th – 30th July we have the Ladies’ Scottish Open coming to Irvine too. A veritable feast!

At Fullarton ConneXions (Wednesday 12th July, 7.30pm) we look forward to hosting Ken Revie (chaplain to the European Pro’ Golf Tour) and South African golfers Hennie Otto & (hopefully also) Dean Burmester, giving an insight into the professional golfing world and the difference faith makes. It’s great for the town of Irvine and North Ayrshire to be able to welcome The World and demonstrate our warm, friendly hospitality!

Golf is a fantastic game, but like many other excellent activities, it is in decline, with golf clubs finding it difficult to recruit new members. In contrast ‘cycling’ is on the up and increasing in popularity, seemingly more accessible than golf. It is good that under 16’s can get into the Scottish Open for free, accompanied by a paying adult, and helpful that more clubs are opening up to all ages, both male and female. And with the handicap system golf has a trump card, offering a game which people of all ages can compete together at. 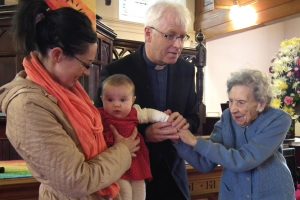 So, what are some of the attractive selling points for Christian Faith and Church? So many, including: the celebration of all-age community and friendship in a day of isolation and loneliness; release of worry and fear into the hands of a higher power, Who cares intimately for you; a bigger picture, able to handle suffering and death with raw realism, compassion and positive 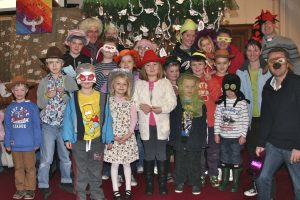 optimism, in a day when people ‘don’t do death’; a source of sacrificial love, which transforms attitudes, relationships and communities; a historical leader, teacher, example and saviour, in whom to trust, follow and find intimacy with one’s Maker.

So, why aren’t people flocking?