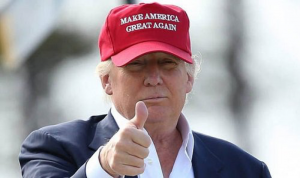 Brexit, Trumpit, What-ever-will-happen-nexit!? Donald Trump’s election has again ‘set the cat among political pigeons’. The World wonders what this new presidency will mean for international treaties, relations and peace, and the care of poor and vulnerable people within The USA. what will the real cost of ‘Making America Great Again’ be?

‘Trumpit’ has divided evangelical Christians, with Billy Graham’s son, and influential US evangelist, Franklin Graham backing Trump to make a positive difference, “Donald Trump will put together the best team in Washington that America has seen for many years.” The pols claim 81% of white evangelical Christians backed Trump – the largest margin for a Republican candidate in the last three elections. But Christians who did not support Trump have particularly questioned his record on the treatment of women and minority groups. 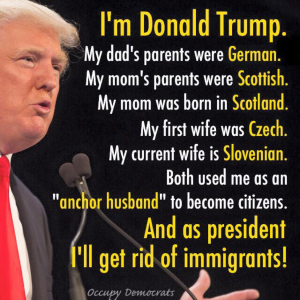 Rev Jim Wallis blogs, “Trump turned populist anger into hatred for “the other” by turning economic resentment into racial resentment. “Donald Trump, making himself into the champion of the forgotten outsiders, is not only a ridiculous joke, but shows the marketing brilliance of someone who has never had a commitment beyond his own ego and self-aggrandizement…His ubiquitous hat that famously says “Make America Great Again,” now clearly does mean “Make America White Again.” Donald Trump ran a campaign based on racial bigotry, misogyny, and xenophobia — and an overwhelming majority of white American men voted for him. And, very sadly, a majority of white Christians voted for him.” 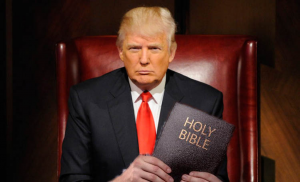 Whatever the after-cry and final analysis of Trump’s victory, Hilary Clinton was blown away by The Trump. We pray that, like ego-centric Kings Nebuchadnezzar and Darius, who listened to good advisors like Daniel, Shadrach, Meshach, and Abednego, President Trump will humbly listen to godly wisdom. Though one might fear the furnace and lion’s den of his wrath and Nietzschean / Machiavellian tendencies, which see ‘results justifying the means’.

Trump’s ‘eye for an eye and tooth for a tooth’ undermines the ‘peace-making’ approach of Jesus, “When someone crosses you, my advice is ‘Get Even!’ That is not typical advice, but it is real life advice. If you do not get even, you are just a schmuck! When people wrong you, go after those people because it is a good feeling and because other people will see you doing it. I love getting even. I get screwed all the time. I go after people, and you know what? People do not play around with me as much as they do with others. They know that if they do, they are in for a big fight.” – Donald Trump, Art of the Deal.

What might Donald Trump meeting the real Jesus Christ look like? This charismatic and powerful president elect, who says, “I like to be good. I don’t like to have to ask for forgiveness.” Would surely find himself humbled to confess his sins and submit his life to The One True God. Better to have that encounter in this world and receive Jesus as Saviour than to hear ‘The Trumpet of The Lord sound’ and meet Jesus beyond the grave as ‘Judge’! 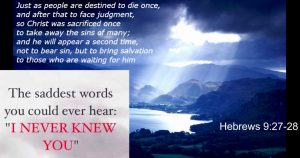 But, when we point the finger at someone else, do we see the 3 fingers pointing back at ourselves! Have WE recognised the awesome presence and power of Jesus Christ? Are we open to such a soul-saving, direction-changing, life-transforming encounter with Jesus? The saddest words in the whole universe are the words of Christ on Judgement Day, “I never knew you.”