Imagine: You win lottery millions and, on entering the building to collect, you’re told that someone else has won instead. Like La La Land’s producer Jordan Horowitz in mid-flow of his acceptance speech, could you graciously concede defeat and hand over the Oscar for best film to the rightful winner ‘Moonlight’?

As the glitter dust settles on Moonlight’s Oscar and Laugh Laugh Land-Gate rolls on, ‘White Helmets’ towers tall in Hollywood, Oscar winner for best ‘short documentary’ and viewable on Netflix.

Around 3,000 Syrian men and women volunteers have been trained since 2013 by Turkish search-and-rescue experts. They claim to have rescued at least 60,000 people since 2014, with more than 140 volunteers killed in the process. Syrian President Assad accuses the White Helmets of having links to terrorism and anti-Assad movements. However, the group claims to be impartial and only interested in saving lives amid the chaos and atrocities of war. Their motto, taken from The Muslim Quran, is “To save a life is to save all of humanity.” 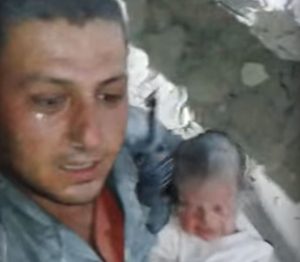 I know that, under President Assad’s control, Christians were safer than under many Muslim regimes and that the Syrian situation is terribly complex, but it’s abhorrent that Russian backed air attacks bomb civilians and go back to bomb the same area soon after, to try and kill these humanitarian aid workers in action. The tear-filled emotion which accompanies the extraction of a days old ‘Miracle Baby’ from underneath layers of creased and crushed concrete will stay with me for a long time. 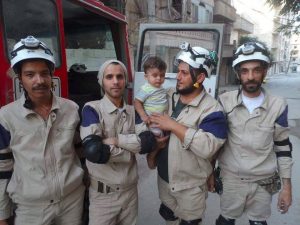 The humble caring humanity expressed by these White Helmeted heroes is endearing and inspiring. Two ‘White Helmets’ involved in the filming chose to remain in Syria, rather than travel to The Oscars, because they were more needed at home saving lives!

Boy, it makes you grateful for the relative peace and quiet we enjoy here in Scotland compared to the daily terror of others in the world today. It also provokes one to pray for peace makers in Syria, positive pressure from other governments, and that God’s light, shining through these dedicated white helmeted servants, will increase and grow. Where there is such love and care for fellow human beings there is hope. St Francis poem:

Make me a channel of your peace, Where there is hatred let me bring your love
Where there is injury, your pardon Lord, And where there’s doubt true faith in You. 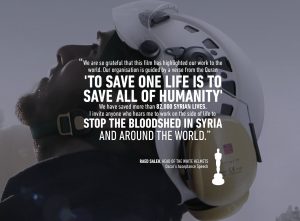 Make me a channel of your peace, Where there’s despair in life let me bring hope
Where there is darkness only light, And where there’s sadness ever joy.

Oh, Master grant that I may never seek, So much to be consoled as to console
To be understood as to understand, To be loved as to love with all my soul…

Make me a channel of your peace, It is in pardoning that we are pardoned

In giving to all men that we receive, And in dying that we’re born to eternal life.